Cascade is pleased to announce that on Saturday, January 22, 2011 Shasta (Del Sur Cascade Mount Shasta) gave birth to three healthy black with white markings wavy boys. They are eating and sleeping alot. There are pictures in the media gallery (Lefty x Shasta litter). Lefty (Ch Odyseas Card Shark) is busy passing out cigar bones in Denver. He has a card game so sends his best to Shasta.

No trackback comments for this entry. 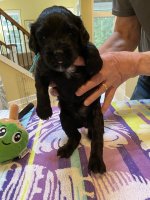